Did you know..? A passenger rolling stock perspective

Each year ORR publishes statistics on the average age of rolling stock for each rail operator in Great Britain.

The train fleet in Great Britain

The national railway fleet (franchised and non-franchised operators) is comprised of almost 16,000 vehicles. The oldest are those built in the 1930s, which are currently in use on the Island Line on the Isle of Wight. The newest are recently built trains, such as Hull Train’s Paragon fleet and Northern Train’s new Class 195 and Class 331 vehicles.

In the current fleet, over 65% of the vehicles have been built since privatisation (1997 or after). Over a third have been built in the last 10 years, and just 4% were built before 1980. 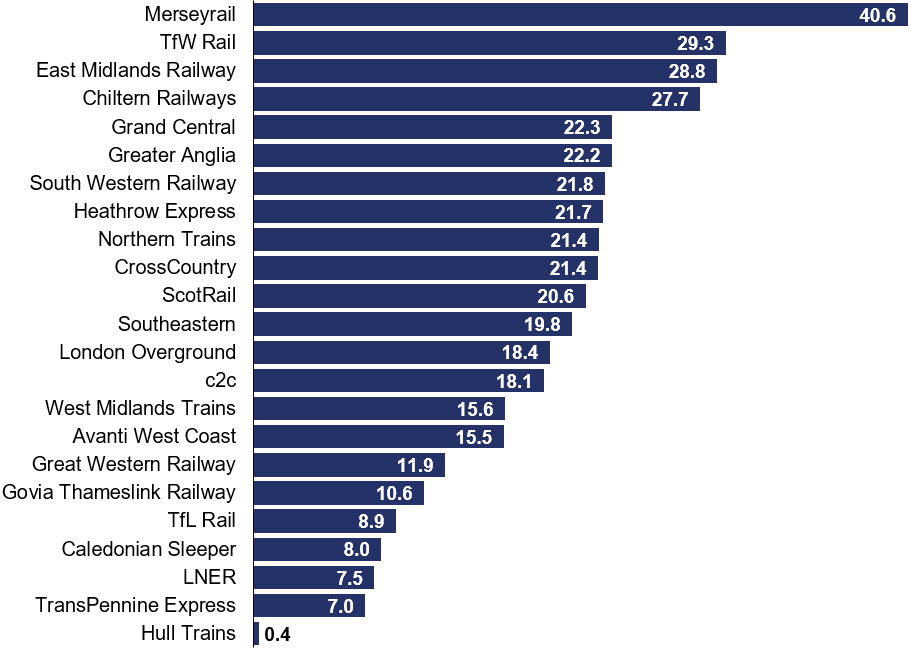 What drives the changes in average age?

A rail vehicle has a typical service life of around 30-35 years. Therefore, after a period of investment in new stock, the average age will rise for a number of years before the next wave of replacement vehicles is introduced bringing the average age back down.

Between 2009-10 and 2019-20 the average age of rolling stock for franchised operators increased by 0.8 years. Any rolling stock that were in use in 2009-10, and were still in use in 2019-20, would have aged by 10 years over this time period. Therefore, the rise of less than one year is a reflection of train companies introducing newer rolling stock, retirement of older vehicles, or a combination of these measures.

These statistics are a measure of the age of a vehicle and because rail vehicles have a long service life, an important factor for customers is how the train is maintained and refurbished over its life to improve the experience on board the train.

Transport Focus runs a network-wide survey to collect opinions of train services. In the Spring 2020 survey, 75% of people ranked the upkeep and repair of the train on their last rail journey as very or fairly good. However this varied by individual train operator, with the lowest for Greater Anglia at 61% and highest for Heathrow Express at 93% (classed as good). When asked about the comfort of seats, the national figure was that 66% of people rated this as very or fairly good. Again this varied by operator, with the lowest for Greater Anglia (56% classed as good) and the highest for Heathrow Express (91% classed as good).

What do we publish?

Every November the ORR publishes its annual Rail Infrastructure and Assets release, which contains the latest data on the average age of rolling stock, alongside other measures such as the length of the network, track electrification, and the number of mainline stations. The release also includes some detail on why the average age has changed for each operator, such as the introduction of newer stock or the addition of older vehicles.

The data source for the average age of rolling stock statistics is the R2 database, which is maintained by RSSB. R2 holds details of every vehicle registered to operate on the UK railway, and is the single repository for all vehicles and major components with full maintenance history

Where can I go for further information?

All figures quoted in this blog are taken from the Rail Infrastructure and Assets statistical release, the Long Term Passenger Rolling Stock Strategy or Transport Focus’s National Rail Passenger Survey.