I was asked to speak at this year’s International Rail Safety Conference, on the subject of “Learning from incidents and planning change” and it was an easy decision for me, what to speak about.

At ORR we’re able to boast some of the most knowledgeable people in the rail industry, with a huge diversity of experience, covering engineering, asset management, train operations and (of course) regulation. These people are our number one asset and we rely heavily on their judgement, to decide which questions to ask and how to act when we identify problems.

In many other industries, this reliance on human intuition would be seen as old-fashioned. These days, more and more important decisions are being made using “big data” and “artificial intelligence”, rather than good old-fashioned questions, answers and human intelligence. Today, at ORR, we are trying to get the best of both. For example, I could give you a newspaper article on a subject you knew nothing about: maybe an election in Africa, or a new TV show from Asia. Based on just a few paragraphs and a couple of pictures, within five minutes you would be able to form an opinion about it: whether you approved or disapproved – and maybe even what you would have done differently.

If you had millions of newspaper articles and a team of very clever programmers, you might be able to teach a computer to interpret one subject. But people’s ability to find meaning, from just a single glimpse at some really nuanced information, is simply staggering – and well beyond the capability of even the most powerful supercomputers.

However, if I asked you to remember that newspaper article a month later, you would probably struggle to remember any of the names or numbers accurately. If I gave you a stack of a thousand newspaper articles and asked you to make sense of them all, you would probably run away. And imagine if I asked you to translate all the text into Japanese, or redraw all the pictures in black and white. Computers beat us every time when it comes to holding large amounts of information; pulling out the bits they need when they need them; and converting between different formats.

So, how can we get the best of both?

At an organisation like ORR (with around 300 employees), we cannot afford for our people to spend all day hunting for data, or wrestling to get it into a useful format. But, at the same time, we have neither the resources nor the vast amounts of data to move to state-of-the-art “big-data” solutions. So a smaller, hybrid system makes more sense for us.

We carried out a project to take nearly 10,000 different datasets (including things like the number of failures of a particular type of equipment, or the amount of money spent on a particular activity, or how much it rained…) and prepare them so that all the storage, recall and re-formatting was “computer friendly”, but unintelligible to a human.

Then we built a “human friendly” interface, where the user is given the flexibility to ask whatever question comes to their mind today, for example: 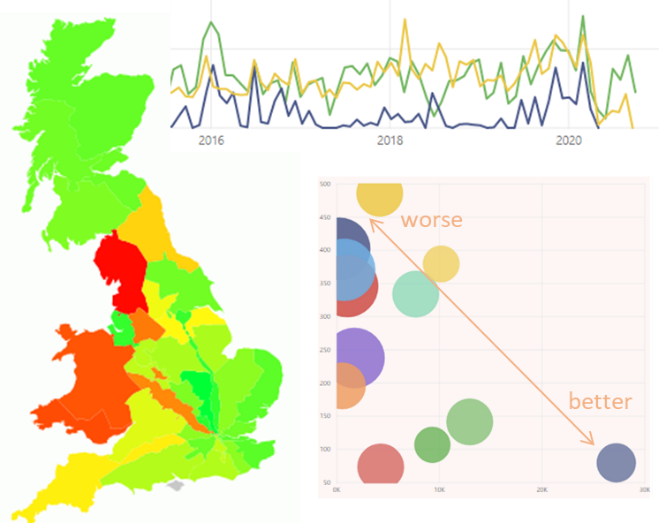 We presented this concept and an early prototype at the International Rail Safety Conference on 19th October. Following some lively discussions on the day, this has kick-started conversations between ORR and several other rail industry bodies, who have been wrestling with the same problems.

We’ve found the solution for a medium sized people-centric organisation like ours is not to “just stick to the old-fashioned method”, but nor is it to “replace everything with the latest technology”. The sensible answer is to keep the best of both.