Network Rail owns the freehold to the vast majority of  more than 2,500 railway stations in Great Britain.

Most stations are leased to and operated by one  of the passenger train operating companies operating in accordance with an agreement awarded by the Department for Transport or Scottish Ministers.

This diagram explains the relationships which exist within the contractual regime: 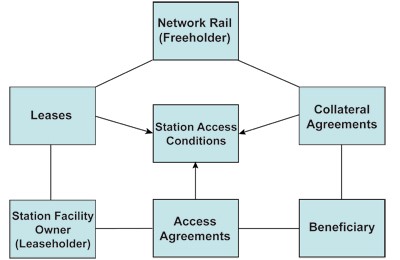 The Stations & Depots team are happy to discuss any station access queries and can be contacted at StationsandDepots@orr.gov.uk.